If at first you don’t succeed…

For years and years I have been trying to prove my worth in hang gliding. Entering competitions in the beginners class and desperately trying to complete at least part of a task or just land somewhere where I couldn’t see the hill I had taken off from. I was beginning to think I was a terrible pilot and it was never going to happen.

One beautiful day, I tentatively took off from Clatter hill, Powys. I always try not to put too much pressure on myself so that I don’t feel too disappointed when I fly straight to the bottom landing field. But Sunday the 5th August was different!

I spent 15 minutes scooching up and down the ridge until suddenly I felt a great thermal, I started circling with a few other pilots and rising up to cloudbase. Drifting back behind the hill can be pretty daunting but I told myself not to look down and just concentrate on keeping in the thermal.

At that point I carried on downwind on task, flying from cloud to cloud, topping on height when needed. It was an incredible day, perfect flying conditions and breathtaking views. In my elation I thought I had flown straight past the turn point. I didn’t think that it was worth going back for seeing as I had almost beaten my personal best flying distance.

I carried on to goal at 30 km, but incredibly I has still boating about at cloudbase! I decided to carry on downwind for a further 20 km, before spiralling down from base and landing (seeing as I didn’t actually know where I was going!).

After a happy landing I found out that I hadn’t actually missed the first turnpoint of the task – and had won the task for the day!

Hang gliding remains to be both the most challenging and rewarding sport I have ever tried – and it’s good to remind myself that if at first you don’t succeed, try and try again! 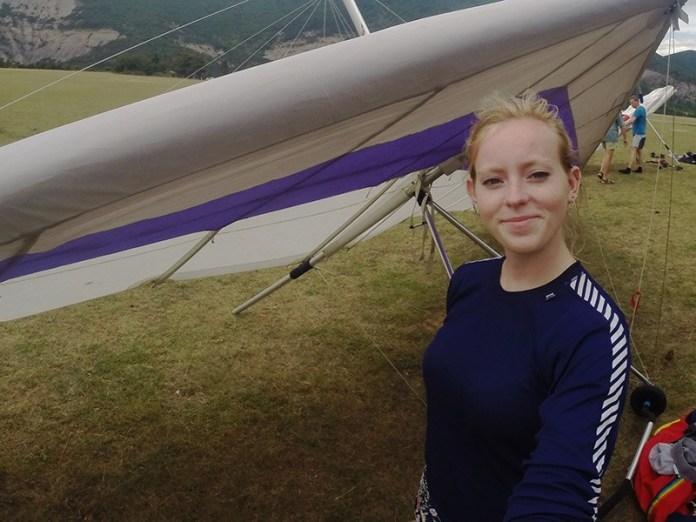 Charlie
Charlie was inspired to take up hang-gliding at 16 by her dad. After just a week of training she began flying with a club and five years on is now taking part in the British open series competition and expanding her cross-country experience. She aims to encourage young people to try the sport, and prove that it’s possible to juggle work, study and flying!

Charlie continues to prove why hang-gliding is such an accessible, and addictive, sport
Blog

Follow Charlie through her hang gliding life as she challenges the norm and proves both the physical and mental benefits of this fantastic sport. A perfect way to beat the 2020 blues!
Blog

Flying South for the Winter

Like many birds, last year I found myself fighting a magnetic pull to travel south for the winter. As winter drew closer I was...
Blog

This year (June 2017), the British hang gliding national competition was held in Monte Cucco, Italy. This competition saw 40 pilots come together from...